April 01, 2019
Accidentally texted my mom that I ate Pelican chicken after eating here. Also this was a Korean fried chicken restaurant, or a KFC.

Environment: I think the concept of a dining hall hiding behind a draped curtain is underdone in the modern restaurant meta. Everyone is running for open-air bullshit and is too afraid to reduce ceiling space cause “we’re too cheap to hide the pipes in the ceiling so you’re just going to deal with it”. Pelicana upends this canon by not only making the ceilings ~8 feet tall, but also hiding the table area at the end of a long hallway that in any other restaurant would lead to a bathroom. 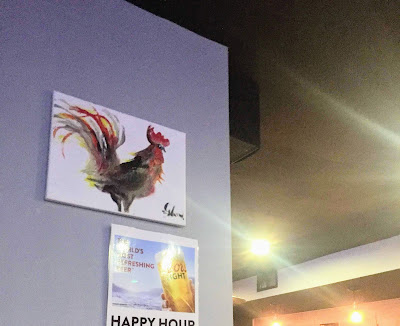 The decor was minimal, but did include a painting of a rooster and a poster that told me to “eat chicken!” I vibed with the music, which was a lively combination of old Kanye/J. Cole type hip hop. We were seated at a booth for 6; being 3 people, this blessing of space can only be a reward from the food blog gods. We ordered an entire fried chicken to split amongst two wpeople, which had the option of being boneless. Personally I like the carnal satisfaction of tearing meat from bone, but I decided to give de-obstacled chicken a try. We ordered an entire boneless fried chicken, half on “elementary” spicy and the other half plain. 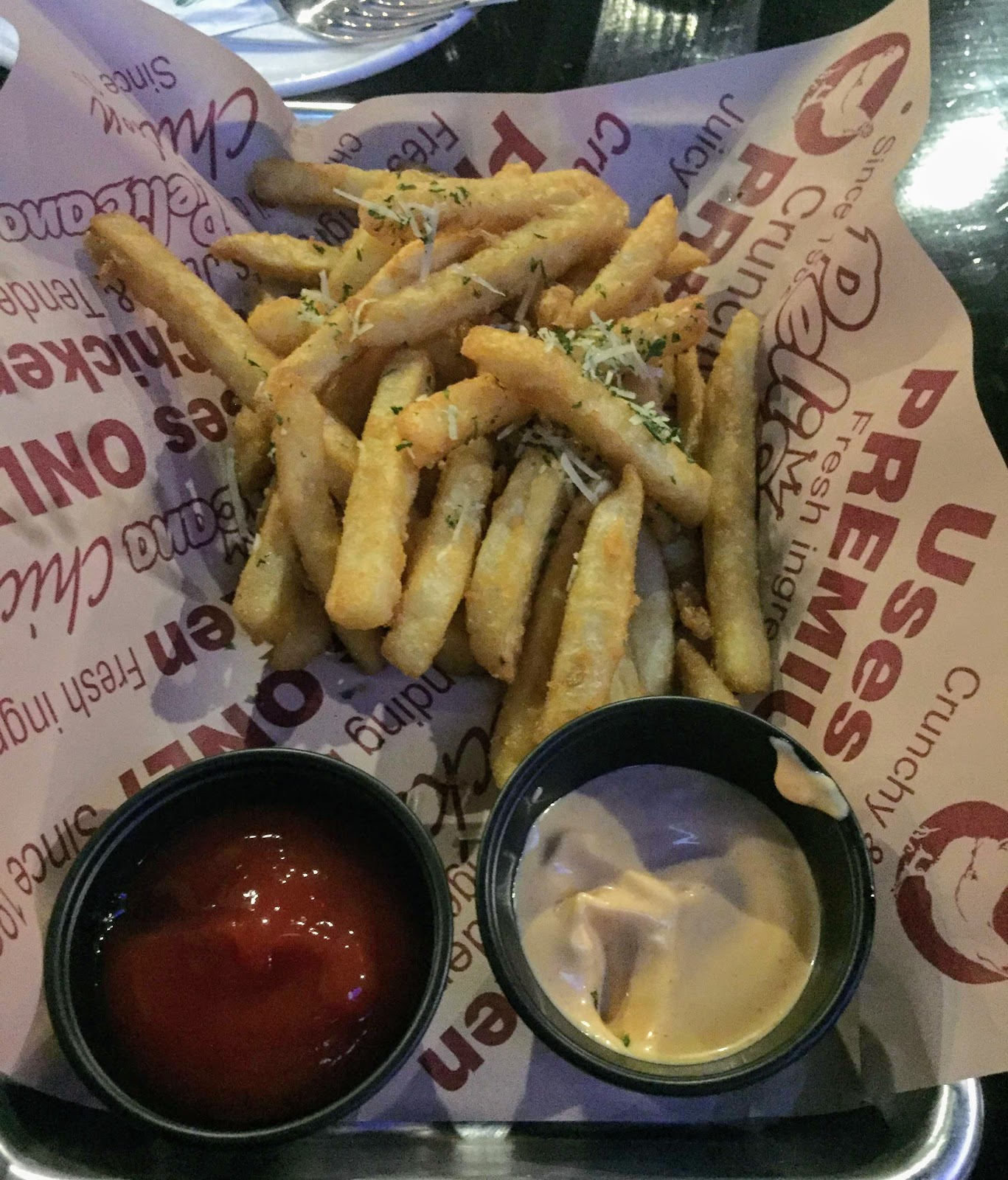 We also got some fries! They were garnished with parmesan, which is a recent fascination of mine. It's just so good! The sauces were complementary in color, and I honestly don't even remember what they tasted like!

An aside: my main qualm with fried chicken is the breading. During the transfer from the batter station and the frier, the chicken always grows a hard, crispy shell that I absolutely despise. The fractal-like tendrils of breading scratch the insides of my mouth as I chew, and I end up with a flayed mouth lining despite a delicious experience. Pelicana is the first place to change this. Despite coming in popcorn chicken form, Pelicana’s breading acted differently. The thin layering never separated from the chicken itself. The chicken meat itself was very tender, not too hot to bite right into. While ordering, I wondered if they just weighed a chicken without the bones and then measured out that amount of meat in order to fry up a “whole boneless chicken”. The breading! Was perfect! The exact balance between being thin enough to not notice coming apart from the chicken in the mouth and thick enough to feel crisping under your teeth. Best of all, no tendrils! I could chew as hard and rough as I wanted, with no concern for my poor, weak gums.


The sauce covering half our dish makes ordinary sweet and sour sauce feel garish. I mean, the orange food coloring and chemical flavor already do, but this sauce operated on a higher level. Somehow the sauce did not make the breading soggy, and added a sweet-ish flavor with just a tiny kick of heat. I am especially unable to eat spicy anything, so this came as a relief to me. This sauce beats ketchup on fried chicken, and that’s high praise.

Rating: I am thankful to the food blog gods for blessing my spring break with the best fried chicken I've ever had. With their meta-breaking environment and good sauces, Pelicana earns a 65/65 whole fried chickens.
Fried Chicken Korea PA Philadelphia

Saw's Soul Kitchen I’m assuming Saw is the owner of both of these places. The OG restaurant for both of these is Saw’s BBQ, which I haven’t been to because it closes at 8 and football games run late when I’m hungry. A place that knows their meat, Saw’s Establishments create some of the best burgers, pulled pork, and wings I’ve ever experienced. Atmosphere: These restaurants don’t put a huge emphasis on lights, which is a little bit of a letdown cause the food looks delicious! Soul Kitchen has large windows to let in light to the ~6 tables packed just tightly enough to allow room for a line to form out the door. SK has a counter for ordering, then you sit somewhere until someone comes out of the kitchen yelling your order. If the line stretches out the door and you stand in the threshold while keeping the door open, a very sassy black woman cashier yells at you. The wall decor is old license plates, with street signs and flying pigs (little metal piggies with wingies) on the
Read more