You know when the only words you can read on a menu are “Daily Recommendation” you’re in for a real treat.

Overlooking the Main Terminal of Grand Central Station in New York (fat name drop intro) is a corner restaurant with its own bar, 4 streetlights, and seemingly no kitchen. Welcome to Cipriani Dolci, a pricey Italian restaurant that has succeeded despite heavy local competition (Little Italy AND New York pizza (and yes, I am counting NY pizza as Italian)).

The restaurant’s confined space only further accents the ~4 step height gradient between the bar floor and the other section’s floor. Basically, big height gradients and I loved it. Besides the floor, their custom streetlights do little to affect the mellow yellowed archival light coming from the ceiling mural of the Main Terminal anyway. The view from either area is wonderful, and I think the lateness of the hour was the only reason there wasn’t a large hubbub coming from the floor. The chairs were nice, completely wrapped in padding and featuring a visible handle on the back for easier movement. The plates and cups were custom Cipriani, with a little symbol resembling the AOL Instant Messenger dabbing on the front. The experience was very branded, which is more acceptable for restaurants than it is for anything else (cough cough clothing).

BTW, not really an Italian vibe present here. Nothing screamed “Mario n Luigi” to me, just a nice eatery that served Italian food.

We ordered the daily suggestion (who calls it that?), which had one of their signature Bellini cocktails + a bao of cheese + a pasta + a cake dessert. Additionally, I had a tortellini dish and someone else ordered a veal plate. I am speaking very vaguely about what the dishes themselves are because I have no idea their name besides the main content. The entire menu was in Italian. Not just like Italian 1 like Spaghetti or Lasagna, but like Tortigliani and Buratta. AP Italian vocab. Anyway. Onto the food!

The appetizer was standard at first, sliced baguettes and italian breadsticks aka pocky sans chocolatt. Really hate this style of bread, if any chefs reading this are about to plan their appetizer menu. Their olive oil and balsamic vinegar containers had Cipriani logos on them, which was kinda cool but didn’t really help the fact that the bread was just bread with a hard crust. My gums weak, Cip! Have some soft bread for me at least. I could’ve gotten the same bread and Italian breadstick combo from a quick trip to Publix and Newk’s. 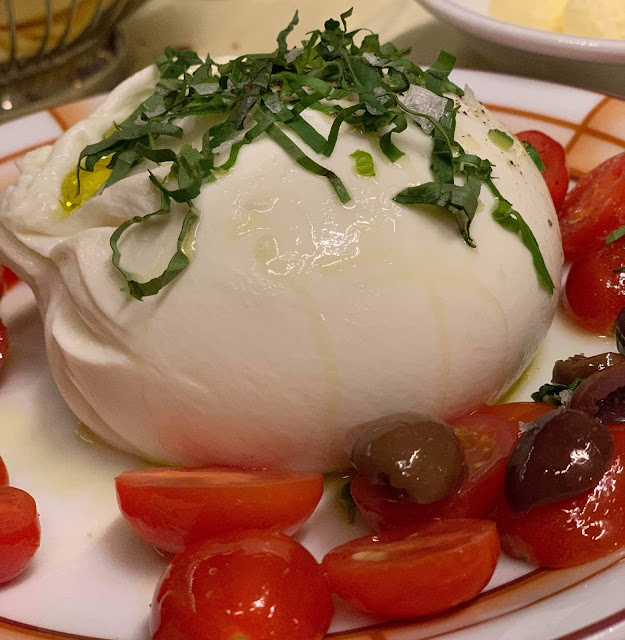 Then it got weird. Our appetizer came, the burrata jiggling and glistening on its plate. Imagine a large sphere of mozarella cheese filled with liquified cheese, surrounded by halved cherry tomatoes and olives. Ooh, better yet, imagine a water balloon except made entirely with cheese. Now, I had no idea we were to slice and dice this orb, but my classier friend offered me the first pierce. With a fork and a knife I was able to pop the great sphere, causing an outpouring of something resembling liquidy cottage cheese. We then stabbed a piece of fruit (don’t @ me it’s hard to target both olives and tomatoes in one noun) to parts of the balloon’s membrane and ate it. The cheese is a little bland, and dripping with oil besides. Not a great appetizer.

The pasta came to save the day. It was flat, thin and wide noodles with the texture and strength of wet paper. The flavoring agent to all of this was a beef brisket. Tasted like the meat ragu I had at the Epcot (you'd know what I mean if you're a real Food for Thoughttie and read my Epcot post), but with totally different noodles. Kind of hard to pick up both noodles and meat simultaneously, but the noodles were absolutely saturated with beef flavor anyway! Magical flavor transfer. 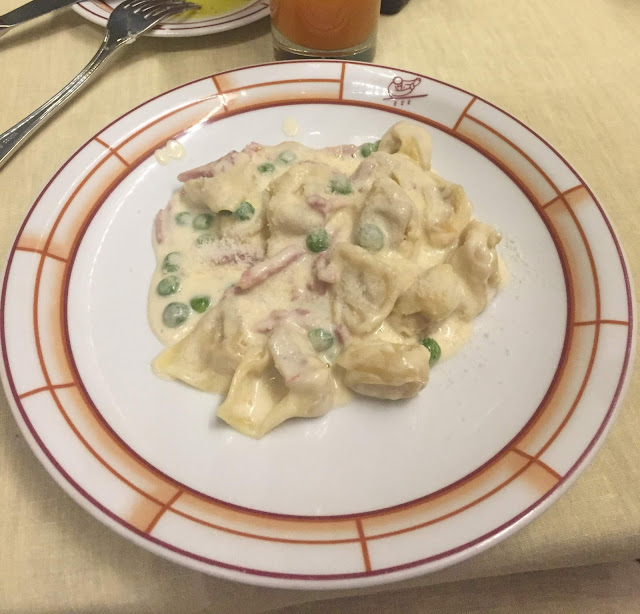 Onto my pasta, the tortellini! This is pretty well known to the laypeople of Italian food, but for those interested it is like a rectangle of ravioli that has been folded to touch itself at the ends. Or a mini pasta-croissant with filling. In this case, the filling was a creamy parmesan mixture. The tortillas also came in a sauce containing peas and ham slivers, which was about as appealing a color scheme as it sounds. The peas seemed like any other peas, the ham like any other corned ham. But the creaminess of the sauce made it all palate together. The creaminess of the parmesan tortellini adds with the saltness of the ham and sauce, all staccatoed throughout with the little sweetness of the peas popping. Mmm! The parmesan flavor was not overpowering, but added a flavor to the tortellini that normal creamy sauce doesn’t usually have. Finally, the tortellini’s structure features a section with an extra number of folds, which added some solidity to the mouthfeel of the whole pasta, allowing me to chew and gain some psychological flavor boost. Absolutely wonderful.

Oh, and our cocktail. In place of real alcohol, we got a little juice mocktail, which the waiter referred to with very extravagant language to reassure us that it wasn’t just a juice for the kiddie widdies. I think he called it “a cranberry spritzer and orange zest, maybe topped with a peach puree”. Nice guy proceeded to serve us a triple juice.

Italian food is hands-down my favorite genre, and the deliciousness of Cipriani’s was only hampered by the price tag and staff whispering to themselves“they’re sharing the pasta??”. We go to college, ok? Delicious and pretentious, Cipriani gets a rating of 18/23 peas like any other peas.
Fancy Grande Italian NY

Saw's Soul Kitchen I’m assuming Saw is the owner of both of these places. The OG restaurant for both of these is Saw’s BBQ, which I haven’t been to because it closes at 8 and football games run late when I’m hungry. A place that knows their meat, Saw’s Establishments create some of the best burgers, pulled pork, and wings I’ve ever experienced. Atmosphere: These restaurants don’t put a huge emphasis on lights, which is a little bit of a letdown cause the food looks delicious! Soul Kitchen has large windows to let in light to the ~6 tables packed just tightly enough to allow room for a line to form out the door. SK has a counter for ordering, then you sit somewhere until someone comes out of the kitchen yelling your order. If the line stretches out the door and you stand in the threshold while keeping the door open, a very sassy black woman cashier yells at you. The wall decor is old license plates, with street signs and flying pigs (little metal piggies with wingies) on the
Read more